Posted November 20, 2015 02:11PM by Skye in the Cycling Forum
@wahoofitness has just released a software update for their Wahoo app (v5.7.4 on my iPhone) that adds support for updating the firmware on your RFLKT or RFLKT+ bike computer (firmware version 1.2.28). This latest update will display calls and text messages (SMS) received by your phone on the RFLKT display, a very nice feature so you don't have to stop and get out your phone to see who's calling. I've missed plenty of "Where are you?/On my way" texts when trying to meet up for group rides, so this will be very handy.

These handy and inexpensive little gadgets are the "remote displays" that connect to your phone via Bluetooth, and allow the Wahoo Fitness app and several others to display all the ride data you would ever want. Plus with the RFLKT+ you also get an ANT+ bridge (handy for allowing my PowerTap G3 hubs to send power data to my phone, without needing an ANT+ key/dongle on the phone), barometric altimeter, and thermometer. Great way to get into cycling metrics without spending big $$$ and I've been quite happy with the performance.

Plus if you're a weight weenie, the RFLKT+ only weighs 40 grams. My Garmin Edge 800 weighs 98 grams... so if you're taking your phone on a ride anyway, you can leave the Garmin at home and save 58 grams. But of course, you can't do maps on the RFLKT - not a feature I use that often anyway. Also, the GPS on my iPhone 4S isn't quite as accurate as the one built into my Garmin, but that depends a lot on where you keep your phone (rear jersey pocket seems best for reception) 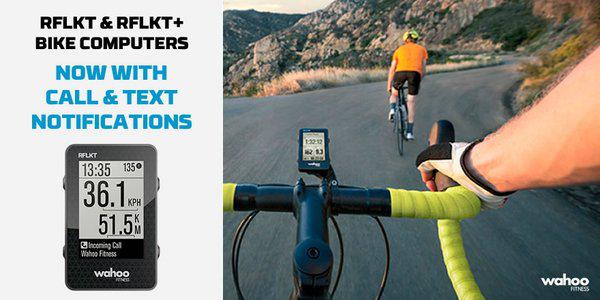