Posted September 24, 2015 06:38PM by Skye in the Cycling Forum
Ran some tests today comparing the Virtual Power feature in TrainerRoad to my PowerTap G3 hub. Virtual Power uses the published/tested power curve of various trainers compared to your bike's speed sensor, and makes a best guess about what kind of watts you're making:

Of course the downside to this method is TrainerRoad doesn't know how much resistance is in your drivetrain, your tire brand/pressure, or how many turns you've put into the resistance knob. The numbers are repeatable, but not necessarily accurate. The upside is it doesn't cost hardly anything, and it served well to track my progress until I plunked down the dollars for a real power meter. They were talking about incorporating a spin-down test to calibrate Virtual Power back in 2011 but I don't think it's high on their priority list. As you can see in this blog post by Nate Pearson, the Virtual Power numbers were accurate if you apply the "y-intercept offset" adjustment of 30 watts in his case.

I've been learning to use Golden Cheetah recently and I couldn't figure out why my estimated FTP from their CP Extended model was significantly lower than what I was expecting. Then I remembered that my FTP was based off the 20 minute test using TrainerRoad and Virtual Power, and now that I have a PowerTap G3 hub, I could finally compare the two.

I set up my bike on the Kurt Kinetic Road Machine, starting at 2.5 turns of resistance (from first contact with the tire), a resistance value I was using simply because it was the lowest resistance where the tire wouldn't slip during sprint intervals. I turned on my Garmin Edge 800 and paired it with the PowerTap G3, and loaded TrainerRoad on my laptop with an ANT+ USB stick and paired it to my Wahoo BlueSC speed/cadence sensor. I set the power averaging to 3 seconds for both and then ran some steady state tests at various power levels. Here are the results:


After the first run, it was clear that Virtual Power was overestimating power consistently by about 25-30 Watts. I then repeated the test at 300 W increasing the resistance knob on the Road Machine by half a turn each time. It appears that 3.5 turns of resistance is a good match, although there's quite a bit of tire deflection at that level - not sure if that will reduce the life of the tire or tube. Unfortunately, there doesn't seem to be any way to set the "y-intercept offset" in TrainerRoad or I would just run at 2.5 turns and apply an adjustment.

Not terribly scientific, but there you go. It roughly matches the amount I figure my FTP was overestimated by (25-30 Watts) so that seems like a confirmation that my method is pretty sound. Too bad it wasn't underestimating my power though, I really hate lowering my FTP value! 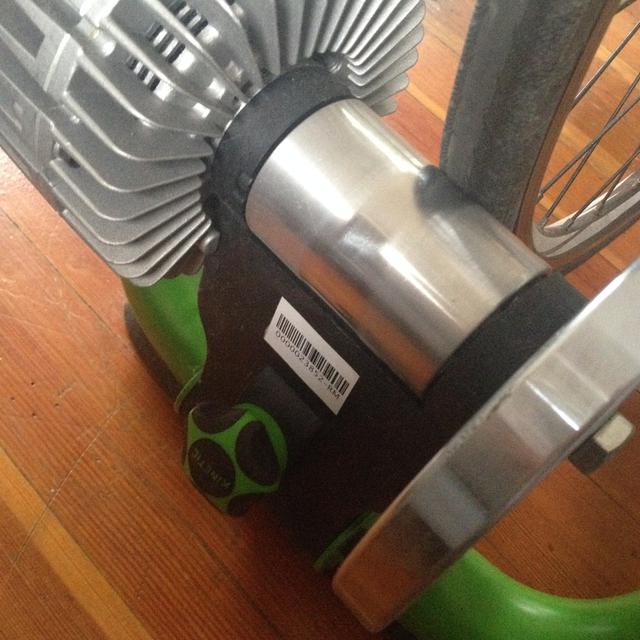