Road disc brakes, worth the upgrade or not?

Posted July 27, 2015 06:37PM by Skye in the Cycling Forum
Now that the 2015 Tour is over, the UCI is allowing pro teams to experiment with road disc brakes and the necessity of neutral service might actually force the manufacturers to agree on a standard. It looks like the Shimano flat mount with 12mm through axle is going to be the de facto standard but I guess we'll have to see how it shakes out. The next few pro races are in the USA but maybe we'll see some on the Vuelta later this year?

It's interesting that so far there hasn't been much adoption of disc brakes in the pro teams in 2016, apparently due to the trouble with neutral service support, questions about wheel changes, concerns with braking points if riders are using different gear, and the added weight. I'm sure the pro teams are under a tremendous amount of pressure from the manufacturers to push disc brakes and boost sales. Maybe disc brakes just aren't going to catch on, outside of specialist disciplines like cyclocross and gravel grinding.

Do you plan on upgrading your road bike to disc? Traditional QRs or through-axles? Let us know, post a reply below 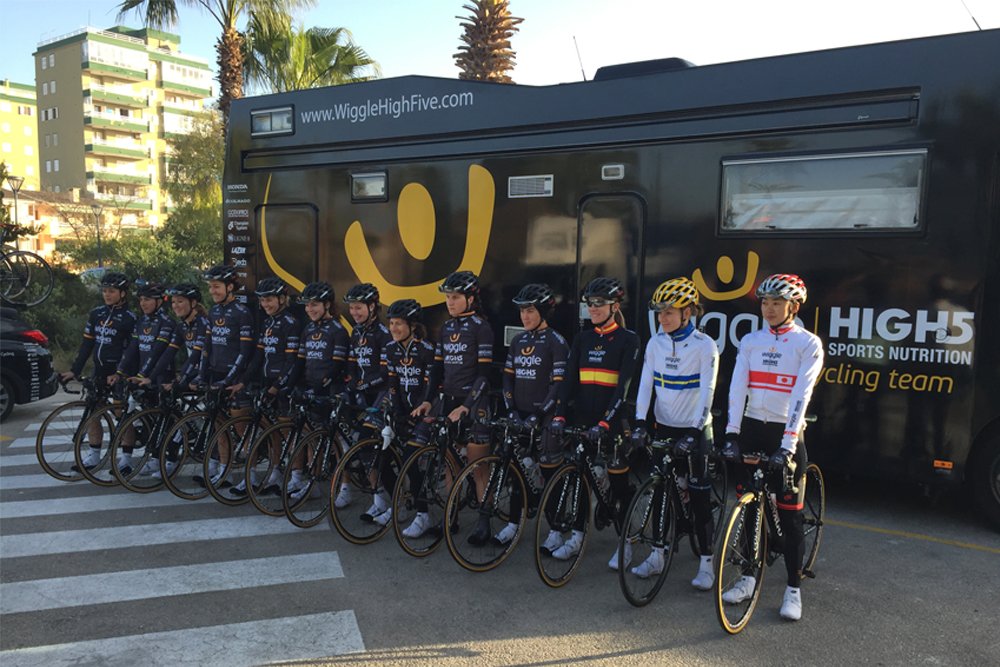 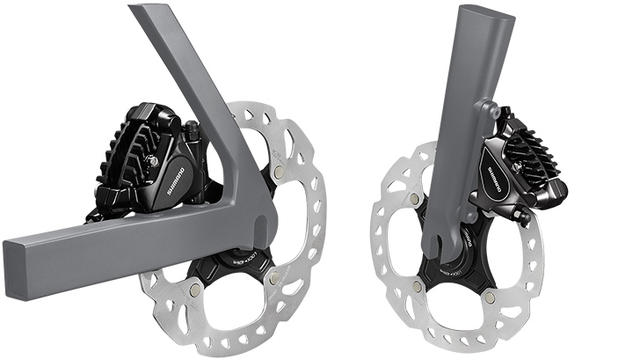 Wow, big news this week after a minor accident in the 2016 Paris-Roubaix left one rider with a deep wound from contact with another team's disc brakes.

Quote
Francisco Ventoso (Movistar)
“I’ve spent thirteen years in the pro cycling peloton and another thirteen moving up the ladder in youth categories. That makes it 26 years on my bike, training every day, enjoying what I like most, my passion. Since I was six, I’ve enjoyed racing, and I continue to do so. I’m so happy to have turned my vocation into a dream job.

"Just like in any other sport, cycling has evolved in many technical aspects. However, it has not done so in others in a way we’d all have liked.

"Through all these years, I’ve witnessed many improvements on different parts of the bike and cycling apparel. We started off with steel, then aluminum, and later on, carbon. That last one came here to stay, since it was as rigid as we needed while also offering lightness. We’ve also stopped using toeclips for clipless pedals, much more comfortable, effective and secure. Days are long gone when we used hairnet helmets: modern ones are now lighter, beautiful to the eye and offer absolute security guarantees when you use them.

"I’ve also seen very important improvements on gearing. My first bike had one chainring and three sprockets; nowadays, we use two chainrings, even three, and 11 sprockets… and I’m certain it won’t end there. Technology evolution has been a sort of trial and error: getting to this point hasn’t been easy. I remember how easily chains were broken when we first used ten sprockets: links that broke, because of materials still not as resistant as it was required… it still happens today. We could also talk about the revolution that has brought the electronic shifting. When it was first shown and used, we all were surprised and made early judgments: it’s not necessary, it might not work well, carrying batteries seems wrong, having to connect your bike to AC is bonkers… And now, we can’t imagine our bikes without it.

"My point is: two years ago, we started seeing disc brakes put on cyclocross bikes, and the rumour was that there could be a chance that they be tested in road cycling events.

"Beforehand, I want to make this clear: I’m so in favor as anyone else that cyclocross professionals or participants in sportives enjoy the advantages of disc brakes during their rides.

"But then, there’s pro road cycling events. Was there really anyone who thought things like Sunday’s wouldn’t happen? Really nobody thought they were dangerous? Nobody realized they can cut, they can become giant knives?

"At Paris-Roubaix, only two teams used them. With eight riders each, that makes it sixteen, carrying a total 32 disc brakes into the peloton. Let me take you to 130km into the race: into a cobbled section, a pile-up splits the field, with riders falling everywhere. I’ve got to break but I can’t avoid crashing against the rider in front of me, who was also trying not to hit the ones ahead. I didn’t actually fall down: it was only my leg touching the back of his bike. I keep riding. But shortly afterwards, I have a glance at that leg: it doesn’t hurt, there’s not a lot of blood covering it, but I can clearly see part of the periosteum, the membrane or surface that covers my tibia. I get off my bike, throw myself against the right-hand side of the road over the grass, cover my face with my hands in shock and disbelief, start to feel sick… I could only wait for my team car and the ambulance, while a lot of things come through my mind.

"Just a stroke of bad luck? I don’t thing so: few kilometers later, one of the thoughts I had sitting in the gutter becomes real.
15km after my incident, Nikolas Maes, a rider from Etixx-Quick Step, comes into the very same ambulance I’m sitting in. There’s a deep wound in his knee, produced by another disc, one of those 32. One question comes inevitably and immediately to one’s mind: what will happen when 396 discs get into a race where 198 riders ferociously battle for position?

"Disc brakes should have NEVER arrived into the peloton, not at least as we know them right now. I haven’t met any rider who has run out of braking power with traditional brakes; I haven’t known anyone who didn’t see his wheels skidding when you brake with all power you’ve got, no matter traditional or disc brakes. Then: why using them?

"Conversely, there are lots of problems to change wheels after a puncture; added trouble for neutral service, which has to carry three or four different sets of wheels to help you out in case your team car is not around… and the most worrying thing, as I stated before, is that disc brakes in its actual concept are giant knives, ‘machetes’ when crashing against or crashed by them at a certain speed. And in some points, we reach 80, 90, 100 kilometres per hour.

"I’ve been lucky: I didn’t get my leg chopped off, it’s just some muscle and skin. But can you imagine that disk cutting a jugular or a femoral artery? I would prefer not to.

"All of this happens because the international riders’ association –the CPA–, national riders’ associations, international and national feds, teams and, above all of them, OURSELVES, PROFESSIONAL RIDERS, are not doing anything. We always think that it’s not a problem if it doesn’t happen to ourselves. We always wait for horrible things to happen in order to take measures. Sooner or later, it could happen to anybody: it’s a matter of probability, we’ve all got the same. Pro riders should take a look beyond our own belly. Others tell us what we should do, but we just can’t forget WE’VE GOT THE POWER TO CHOOSE, AND WE SHOULD MAKE A CHOICE.

"Disks produce cuts. This time it was me; tomorrow, it can be more serious and happen to others.”


Many others were quick to voice their own concerns, and back the idea that this change is being pushed by the bike industry without regards to what the riders want or need

Ryder Hesjedal
@ryder_hesjedal
I have felt this way since the very beginning! Should have never happened! #SafetyFirst #notnecessary https://t.co/3HZNTu80gP 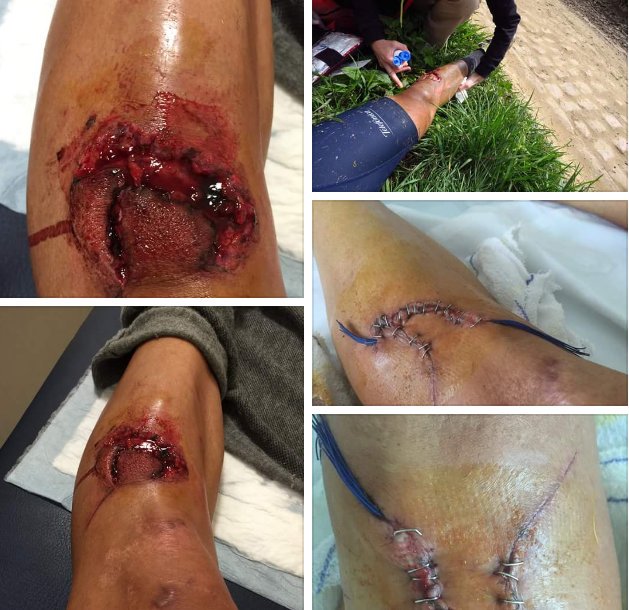 It will be interesting to see the fallout from this incident.

Update: well that was fast....

"We have asked to suspend the tests on the disc brakes to the UCI," CPA press officer Laura Mora said. "They will probably suspend it. We have just had the support of the equipment commission for that.

"We have been talking about the risks of the use of the disc brakes since months and we have sent letters in the past to the UCI and the organizers to avoid such risks. Now they are going to finally listen to our voice. We don't want to stop the progress but we want to find common solutions for the introduction of new technologies without risks for the riders and definitely with their involvment."